Radar is a Karelian Bear Dog mix, possibly with Border Collie, and he is George’s prize frisbee athlete. Radar is a former Washington State Champion who has placed in multiple tournaments, in several events, including distance/accuracy, spot accuracy, and freestyle.

Radar likes life best when he is running full tilt and flying high to catch frisbees- he is a hardy competitor who elicits wows and gasps from any crowd that watches him. He truly is a show stopper! 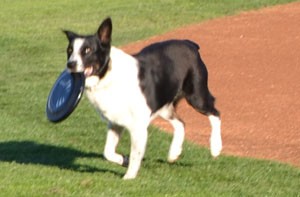 You may recognize him as the dog featured in our site’s logo. This image was adapted from a real photo of Radar jumping for a disc in competition. If you get a chance to see him compete, we hope you will come out! He performed most recently for the Everett Aqua Sox on Bark in the Park Day, putting on an exhibition pre-game as well as during breaks between innings. 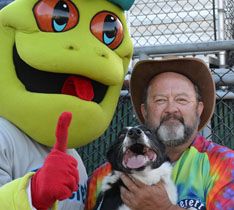 Off the field, Radar is fiercely loyal friend who loves nothing more than sitting with George no matter what he’s doing. Who could ask for more?

As of April 2018 Radar has retired from competition due to an ACL injury.